It turns out that most traditional vitamins aren’t all that nourishing. Sara Cullen used her own health issues as a diving board to rethink the vitamin category entirely. 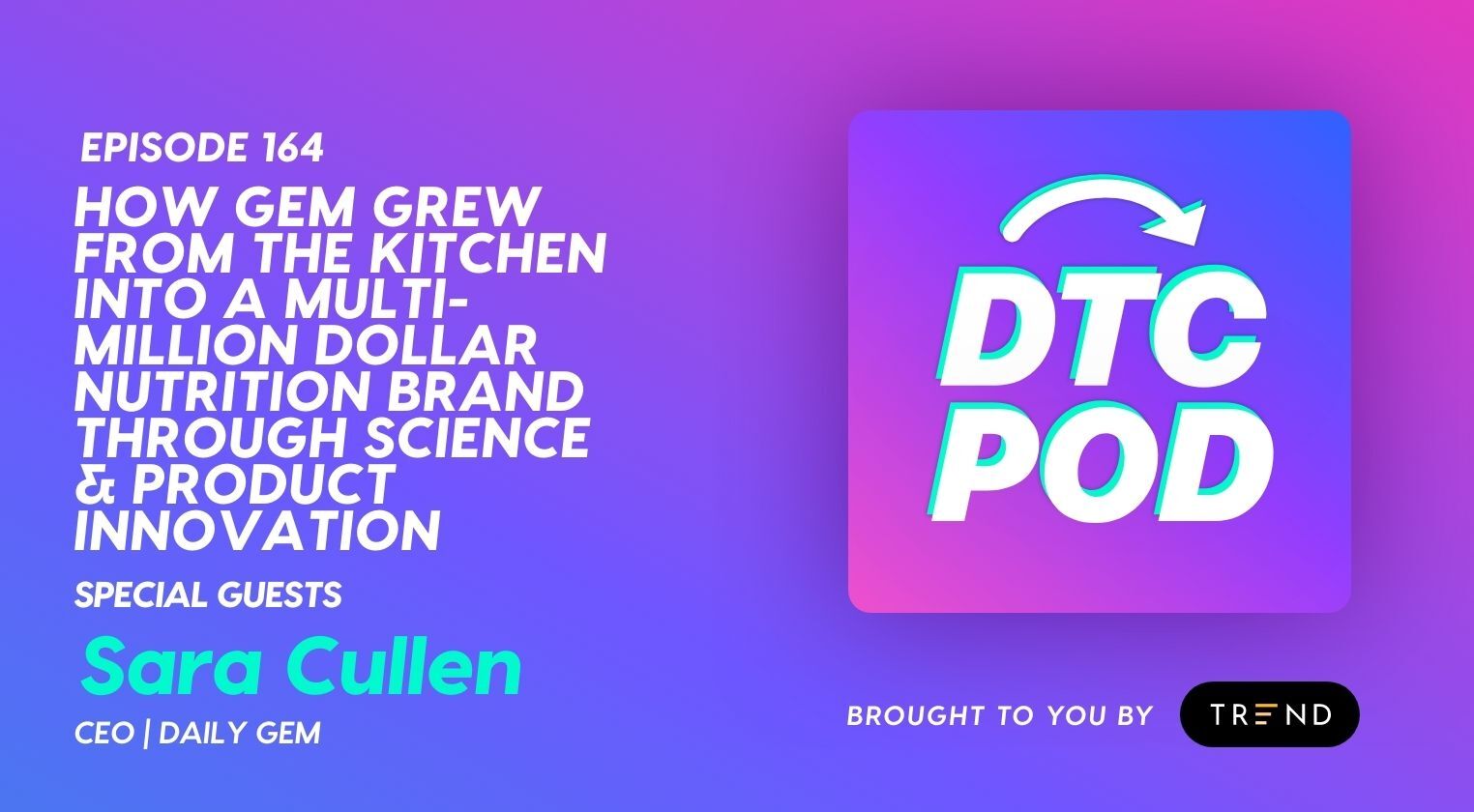 Let’s face it: vitamins can be intimidating. What’s in them? What supplements do you really need to optimize your health? It turns out that most traditional vitamins aren’t all that nourishing. Sara Cullen used her own health issues as a diving board to rethink the vitamin category entirely. The result was GEM, a vitamin bite made with powerful food ingredients that you eat, not swallow. On DTC POD, Sara shared why she’s focused on shaking up the supplement aisle, how GEM quickly went from beta to funded, and when to invest in product versus branding.

“I was starting to struggle out of nowhere really with chronic inflammation, digestion, sleep issues, you name it. And I've always considered myself a relatively healthy person. I had a healthy diet. I didn't really know what was going on. Went through a lot of allergy tests and blood tests and found out that I had a lot of gaps in my diet. Because even if you eat a well-rounded diet, even if you eat perfectly, actually 90% of Americans are micronutrient deficient. We're not actually getting the nutrients that we need. And so like many of us, I turned to the supplement aisle to try to fill the gaps. Started looking at all these vitamins and pills and complicated and expensive sort of supplement routines, and cobbling together swallowing handfuls of capsules. And the more that I looked into it and questioned it, the more that I found that a lot of these things are built wrong. They're made with a lot of artificial fillers, synthetic binders, just a lot of dirty things. You don't actually question where your vitamins are coming from or how it's made. And so I set out to create an entirely new solution. One that's actually real food. And that's how it was inspired and Gem was born.”

Sara’s first step was to organize a Facebook group of diverse women to help understand if there was interest in replacing multivitamins with something better.

“At first I didn't even think about it as the anti-vitamin, as an entirely new idea of a vitamin. I just thought of it as this daily health essential that really worked for me. And I wanted to share it with more people. And so I started a beta group actually, and I joke, on a complicated platform called Facebook Groups. And I had people kind of refer in, so it wasn't just a bunch of my friends, over 300 women across the US. And at first I just formed this community really to see if it was something of interest, to get people's feedback. And I kept iterating on it to address other people's needs, to see what would work. And I got an overwhelmingly positive response of, wow, this is something that could really replace my multivitamin. This is something that really works for me. And that's when really I had the aha moment of, wow, this could be a business and really be a product that is impactful on people's lives. And that's what led me to ultimately raising my first round of capital and then going to market in late 2018.”

Next, Sara surrounded herself with experts who could serve as the scientific backbone for GEM’s products.

“I have a team of scientific advisors that I brought together. And our approach and my approach in building this has always been to have a kaleidoscopic array of knowledge and expertise. And so we have an herbalist, a functional medicine doctor, a neurologist, a biochemist, registered dieticians. And bringing these different perspectives together in how can we look at our health in different ways? How can we actually look at it holistically, and not just through this band-aid lens of a pill for this and a pill for that? And so it took kind of bringing them together, getting their input, and then really co-developing it with this community.”

Too often, design eats up a startup’s time and money when it should really be focused on getting the product right. That’s why Sara packaged GEM in black & white until its recent rebrand.

“I started out really almost with a brandless platform. So they actually came packaged in a recyclable PET container, a small plastic container. And so it was really nicely designed and had a simple white label on it. It was like white and black. And the idea was I didn't want brand to distract from the core product. I think there's a lot of, and I've had these mistakes too in my own past of building companies, where a lot of people will spend a lot of money on these beautiful brand books and invest a ton in brand before they even know their target customer. And that's not what I want to do. I want the product right. I wanted to understand who my audience was. I wanted to understand how to build the right thing for them. And so I started out with a very simple and scalable brand packaging system that was really super minimalist.”

To stay lean and agile, Sara set up manufacturing and production systems that she knew would be scalable as GEM evolved.

“As a food company, it's difficult to kind of have that quote-unquote ‘lean’ startup method. Because it's harder to iterate on obviously a physical product than it is maybe if you were a software company, or something where you can make more methodical smaller tweaks. So I set up a supply chain and I set up a manufacturing and a production system with this packaging and brand that allowed me to do that in the most minimal way possible. And I always thought about scalability in my mind, too, when building out unit economics. So from day one, I made sure that we sourced things that I could scale with, that I could iterate on pretty quickly, so that we could get to that product market fit faster.”

GEM didn’t have fancy pitch decks. Instead, Sara invited potential investors into her beta group so that they could see all of the feedback and interest firsthand.

“It was about a month into that beta group that I realized the potential. And I actually invited investors to this group. So I actually used the group as my beta. As my product market fit potential. So that was really my prototype version, if you will. So I had the product for people to taste, it continued to evolve obviously from there the next six months. But I had the initial product. I had the initial community. And I had the initial feedback as well. I did a lot of surveys within this group, asking questions. We had different dialogue conversations happening. And so I just invited these investors. They could see transparently what people were saying. Good, bad, ugly. And that was my approach. I don't even know if I had a pitch deck in the early days. I mean, that was really it. It was about the product. It was about our mission and vision of building this future of nutrition. And that's really how we actually raised that initial capital.”

25:15 - Competing in the superfood space

Today, GEM doesn’t just compete with vitamins. They also go toe-to-toe with superfoods, powders, and other players in the health space.

“We're really indirectly competing with so much more than just traditional supplements in gummy or pill form. We do get a lot of switching behavior from consumers who don't want to eat a candy, who don't want to swallow pills and capsules, and who want to have a whole food solution that's more natural to get their vitamins. But also we were getting a lot of vitamin-skeptics, people who've never taken vitamins before because they don't believe in it, because it’s scary. You don't really know what's inside of it. Now, the landscape has changed so much where we're this convenient all-in-one daily nutrition. And so even like powder companies now, there's all these superfood powders and things like that where people are trying to get all of their essential nutrients. Gem also helps satisfy that need. And so now, I think the landscape has evolved where when you actually look at the supplement space, it's so much more than just supplements. You're looking at functional food, you're looking at functional powders. You're looking at a lot more players in there. And we're an entirely different form factor, but we're kind of evolving that even more with that form factor, and really disrupting and displacing a lot of those players.”

There’s no need to reinvent the wheel in DTC. The only unique tech that GEM uses is an SMS program that allows them to regularly check in with subscribers.

“Our tech stack is super simple. We're built on Shopify and we use a subscription plugin within Shopify called Recharge. We use Klaviyo for our email system, and SMS as well. And we also co-built our own SMS for helping manage your subscription. So we text our customers three days before your monthly subscription, asking you how everything's going, if you want to swap flavors, if you want to pause or anything. And so we have a super communicative strategy there through SMS. And of course we have the data side as well. We use Looker. I know there's a lot of different data platforms out there. But what's amazing about the direct to consumer world obviously is that you can really get to market quickly with a pretty simple tech stack. And there's a lot of tools where you don't need to reinvent the wheel necessarily from the ground up.”

The next step for GEM is to grow their community of users and enlighten more people on the value of using the product every single day.

“Consistency is so important. And that's why we're a subscription model. It's about one bite a day. In order to optimize your health, you really do need to be consistent. And so that's why we offer a subscription. And we hope through the structured experience that we provide you that that becomes something of a habit. It’s shipped to your door conveniently every month so you don't have to think about it or worry about it, in 30 bite packs. So it comes in 30-bite compostable bags. And then we offer you a big tin, an eco-friendly tin that you can refill and have on your counter. And then we also offer you a travel tin for on the go. And so we give you three different packaging systems in your starter kit, so that you can always have it with you wherever you need it in the house. And you can take it with you as well. So hoping to provide different levels of convenience.” 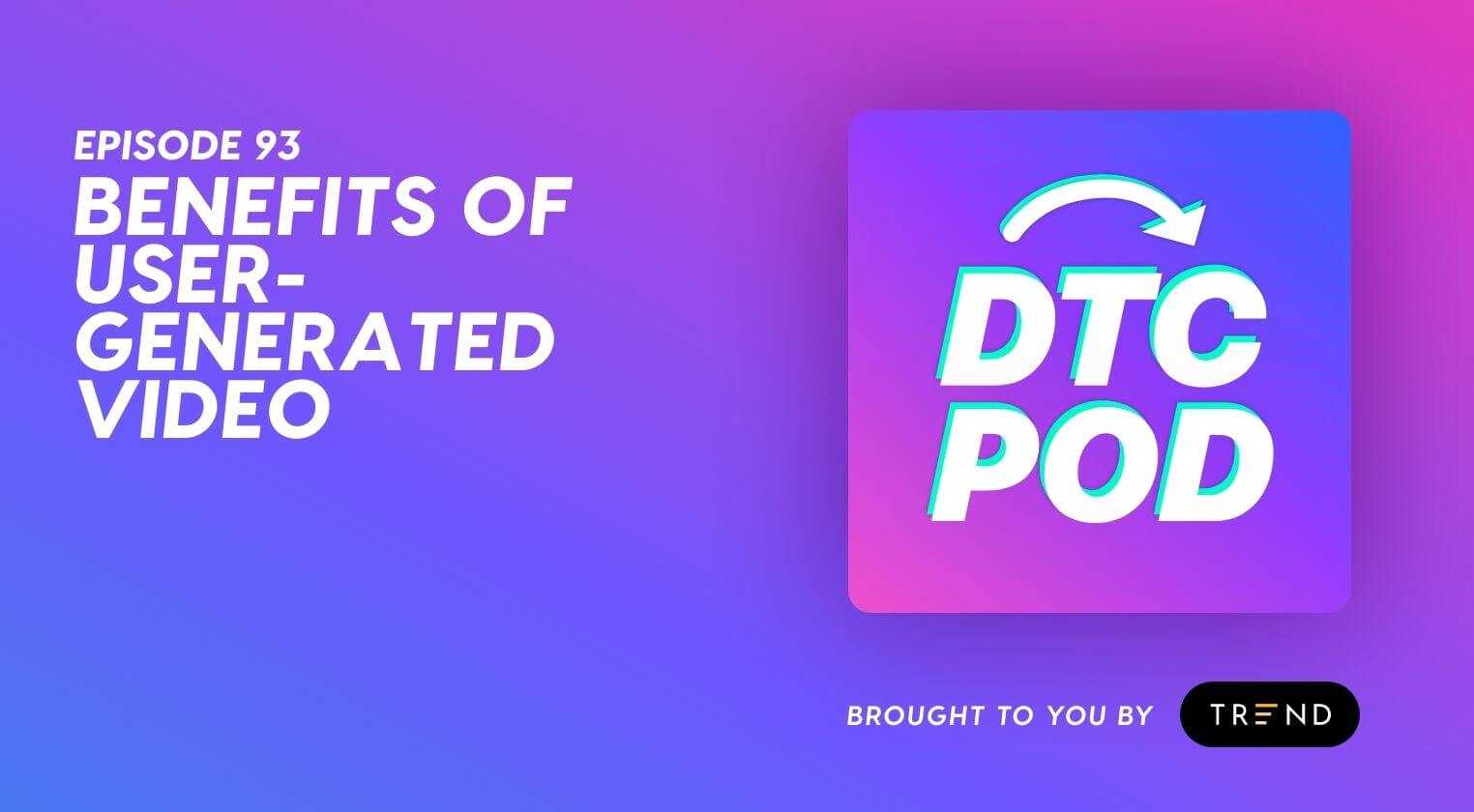 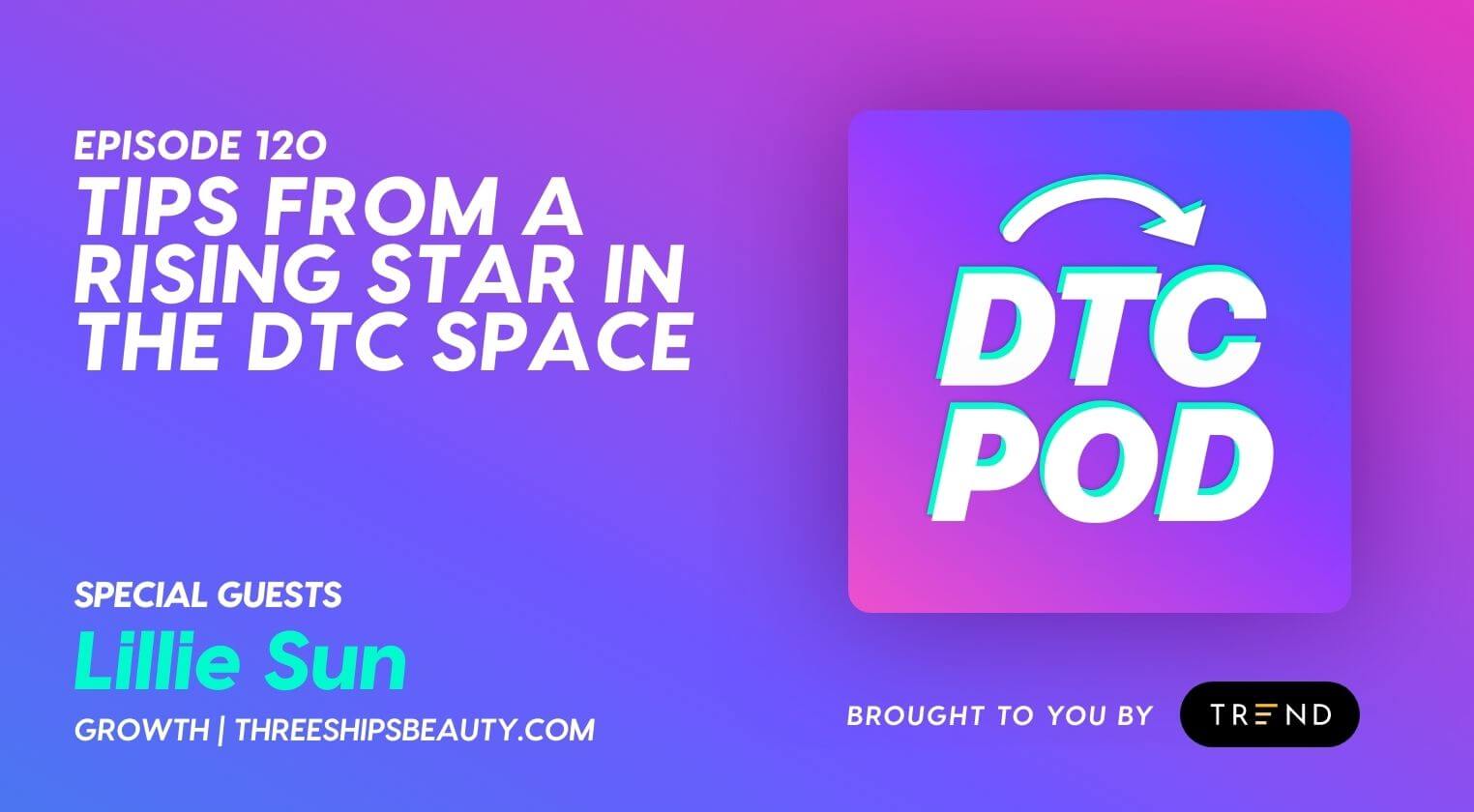 Subscribe to the newsletter and stay in the know.
Thank you! Your submission has been received!
Oops! Something went wrong while submitting the form.
Showcase
Pricing
For Creators
Creators FAQ
About
Blog
Podcast
Brand FAQ
Contact
Careers
Privacy Policy
Terms of Service
© 2022 Trend. All rights reserved.